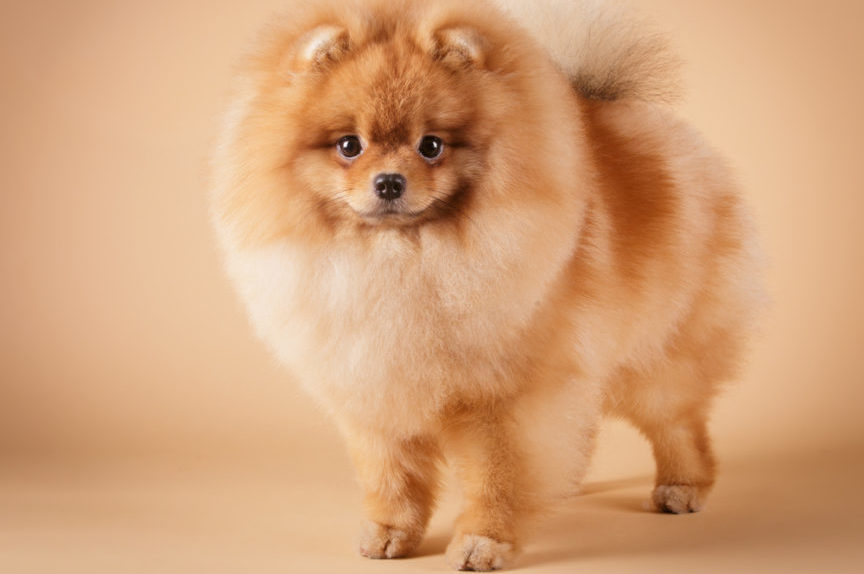 Pomeranian miniature spitz is the smallest of spitz, non-aggressive and warm. I need close contact with people. This is a companion dog with exceptionally abundant, protruding hair, pointed snout and large dark eyes. Always smiling, he likes to play and play.

Pomeranian miniature spitz has a cheerful disposition and a lively temperament. He is busy, inquisitive, ubiquitous and willing to have fun. Very attached to his guardian, sensitive and devoted, he doesn’t like to stay alone for long; he would like to accompany the owner constantly. He feels very bad left for hours in an empty house. Cordial and kind towards all household members, he usually has his favorite among them and it is on his lap that he likes to indulge in exceptional caresses.

He is distrustful of strangers and is reluctant to make friendships with strangers. Visitors to the house will first evaluate from a long distance before allowing them to approach each other. The small height does not allow him to act as a typical guardian, but he is a very alert and attentive dog, which will signal any suspicious murmur behind the door. It is worth realizing that his willingness to watch and high barking can cause a lot of trouble for carers (and their neighbors).

Pomeranian is not aware of its small size, it seems to him that it is in no way inferior to their four-legged friends. His courage and confidence cause that sometimes he behaves even recklessly. He is generally sociable and friendly to other animals. He is happy to be in a group of dogs, which should be of similar size due to its safety.

She arranges relations with children well. He loves playing with people and all joint activities. Children, however, must be large enough to understand the needs of such a small dog and not accidentally hurt him. Rough handling of pomeranian can even result in a broken bone.

The miniature spitz is proud and independent, with a great sense of dignity. He likes to have his own opinion, but you can negotiate with him. It easily adapts to any conditions. He will feel good both at home with the garden and in a small apartment. It is an active dog, but it does not require long walks. Its advantage is the lack of a tendency to hunt and chase small animals.

Pomeranian is a typical companion dog that can also act as a domestic guardian. It was bred mainly to make time passable and look effective. Currently, however, you can meet Pomeranian people taking part in sports such as agility, rally-o or dancing with a dog.

Despite its small size, Pomeranian requires proper upbringing and consistency from puppyhood. He is an intelligent, smart, perceptive and inquisitive dog. He is willing to cooperate with his mentor and learns quite quickly. So it’s not worth wasting this potential and approach dogs of this breed like a midget with a little brain.

Pomeranians tend to be stubborn and willingly take advantage of the inconsistency of the guardian. These extremely smart pooches quickly notice his weaknesses and improperly conducted they can even go to aggressive behavior to achieve their goal. However, showing them that being obedient is worthwhile can make them perfect family companions. Therefore, upbringing based on positive reinforcements should be applied to this breed and penalties should be avoided.

Pomeranian miniature spitz likes to show off and easily learns various tricks. A properly engaged guardian can make a real circus artist from Pomerania. These dogs will also work in agility or rally-o. They can be found even at obedience competitions.

A miniature spitz can be recommended to anyone who wants to have a small, effective friend and does not expect absolute obedience. Certainly, this is not a race for nervous and overworked people. The owner cannot be overbearing either. He should be patient and consistent at the same time.

The Spitz will be a good companion for an elderly person spending a lot of time at home. Due to its small size and delicate structure, it is not recommended for very young children. However, it is perfect for a companion of an older child who wants to start his adventure with learning dog tricks and simple sports.

Pomeranian miniature spitz – what is it like? Learn its pros and cons!

Pomeranian Miniature Spitz is a relatively healthy breed. However, like other thumbnails, it may have problems with a dislocated patella. That is why it is important not to let him jump down from high furniture and to ensure proper movement, developing the muscles of the hind legs.

Another common condition for small breeds is the collapsing trachea. This disease usually appears after the age of 6 and requires treatment. Because of the risk of damage to the trachea, pomeranian should be taken for a walk in braces instead of a collar and avoid jerky leash jerks.

Hypoglycemia and hypothyroidism are other diseases that occur in pomerates. Obese or neglected dogs of this breed may also suffer from heart problems. The most common in this breed are murmurs and heart enlargement. However, they usually do not affect the life expectancy of these dogs.

Another, rare but extremely troublesome disease is Alopecia X – a disease causing hair loss on the body for an unidentified reason. It affects such breeds as Pomeranian, Malamute, Chow-Chow and Miniature Poodle. It is not known how this disease is inherited, so it cannot be excluded from breeding. Appears in dogs between 1 and 6 years old. Dogs with Alopecia must be protected against UV radiation.

Due to the small size of this breed of dogs, pomeranian nutrition is not expensive. Among the miniature spitz, however, there are extremely picky individuals. Meals must, therefore, be tailored to the taste of the quadruped – stubborn nature of the spitz can make the pooch eat nothing that he doesn’t like for any treasures.

Food for a dog of this breed should be of good quality, because the condition of the dog’s coat will depend on it. In pomeranian nutrition, you can use both dry and wet food, as well as prepare your own meals at home-cooked or raw (BARF). Despite their small size, these dogs perfectly handle chicken wings or bodies. However, cooked meals must be supplemented with calcium and vitamin preparations. Omega-3 fatty acid supplementation is also important, i.e. adding salmon oil to meals.

The thick Pomerania coat is quite easy to care for, if we carry out the procedures regularly. The generous undercoat of this breed of dogs has a tendency to compact, which requires daily combing. It’s best to use a wide brush with long pins – which reach up to the pooch’s skin – or a long comb. Do not comb too much undercoat, because pomeranian fur may lose its eye-catching volume.

Baths should be carried out no more than once a month. We wash the doggy with lukewarm water. During bathing, it is good to evenly distribute cosmetics (moisturizers work best), which can be difficult due to the generous undercoat. It is also important to rinse the dog thoroughly after washing and dry it with a dryer. Otherwise, excess moisture left on the dog’s skin can cause chafing and hot spots. After drying the pooch, gently comb it with a comb.

Dogs of this breed should not be shaved! Once shaved hair is likely to never regain its original, fluffy shape. Such treatments destroy not only the structure and appearance of the hair, but also its protective properties. Pomeranian can only be trimmed, but in this case, the fur coat should not be shortened too much. In order to refresh the appearance of the pooch, it is good to go with him to a professional groomer.

Pomeranians often have a problem with claw wear, especially when they do not go out for too long walks. The condition of the claws should be checked every two weeks and, if necessary, shortened using sharp cutters. Some miniature spitzes tend to form stains around the eyes. In this case, it is necessary to determine the cause of excessive tearing (allergy, conjunctivitis, eyelid defects) and rinse your eyes daily with a special liquid intended for the hygiene of these areas.

The basic accessories needed for a miniature spitz include, above all, well-fitted, comfortable braces – pomeranian should not be taken for walks in the collar because of the risk of damage to the trachea. The leash should be light, equipped with small carabiners and allow the pooch to explore freely during the walk.

The bed for a dog of this breed should be small and comfortable – the pooch must feel safe on it. A small kennel cage or transporter can be adapted to sleep. However, it should not be used to close the pooch – Pomeranian suffers when they are isolated from their family. For dogs who love to sit on the sofa or sleep on the bed, it’s worth investing in stairs that allow your pet to easily get on and off. This will reduce the risk of patella problems.

To care for the fur of these dogs you will need: a long comb, a wide brush and shampoos for dogs, preferably moisturizing. Pomeranian is a small dog that you can take with you almost anywhere. For doggy-travelers, a convenient transporter, bag for transporting dogs or a special backpack will be useful.

Spitz is considered one of the oldest forms of domestic dogs. They probably originate from a living of about six thousand. years ago, an ancient peat dog, whose remains are preserved in the form of fossils. The oldest image of this type of dog is on the attic wine jug from around 400 BC

Primary people used spitz primarily for guarding and hunting, but in times of scarcity they could also be eaten. Varieties of so-called Nordic dogs (e.g. bales, Karelian bear dogs, Finnish Spitz) are still used in hunting today, while dogs from Central Europe are unlikely to show hunting passion.

The group of long-haired Spitz was known in Germany as early as around 1700. The Pomeranian Miniature Spitz is the smallest variety of these quadrupeds (the Big, Medium, Small and Wolf Spitz are also known ). It was probably the result of the selection of small varieties.

A compact body, a more rounded skull with a convex forehead and a shorter, slightly upturned, finer muzzle are its hallmarks. It is a relatively young breed, but one of the more willingly chosen by future owners.

Pomeranians are one of the most expensive miniature dogs. The price of a puppy after titled parents can reach as much as 10,000 zlotys! The dizzying amounts are due to the fact that this breed is extremely difficult to breed. Pomeranian litters are very small, and childbirth can bring a lot of complications. It is not worth, however, to decide on a dog from a pseudo kennel or a suspicious association and expose yourself to the huge costs of treating dogs with serious genetic defects.

Characteristically short-trimmed miniature Spitz – the Boo dog, described as the sweetest dog in the world, thanks to its Facebook profile has become one of the most recognizable dogs in the world. Doggy died at the age of 12 due to heart disease.

Pomeranian is a breed loved by great artists. Miniature Spitz had, among others, Michelangelo and Amadeus Mozart. 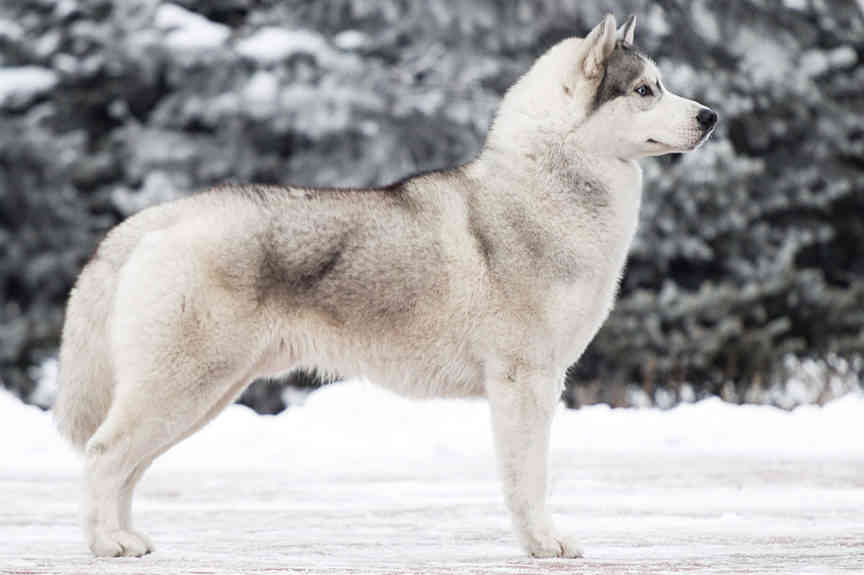 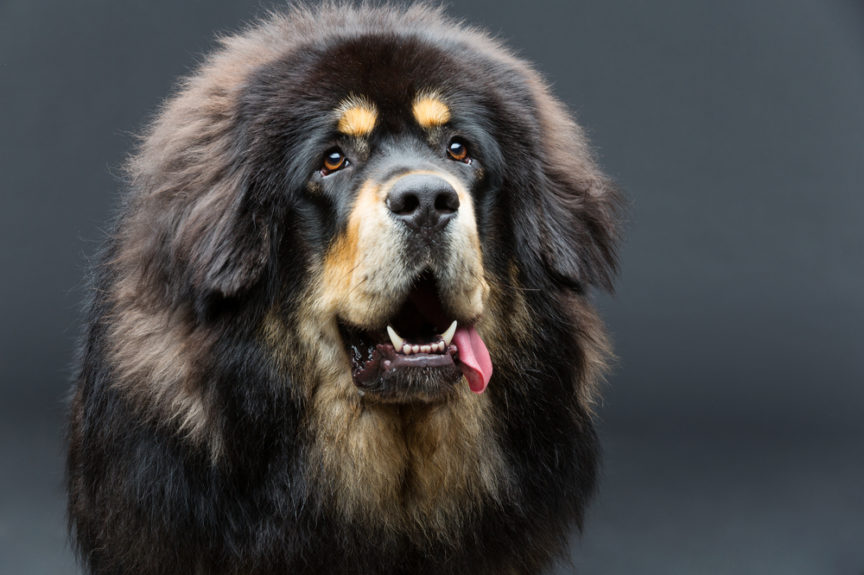