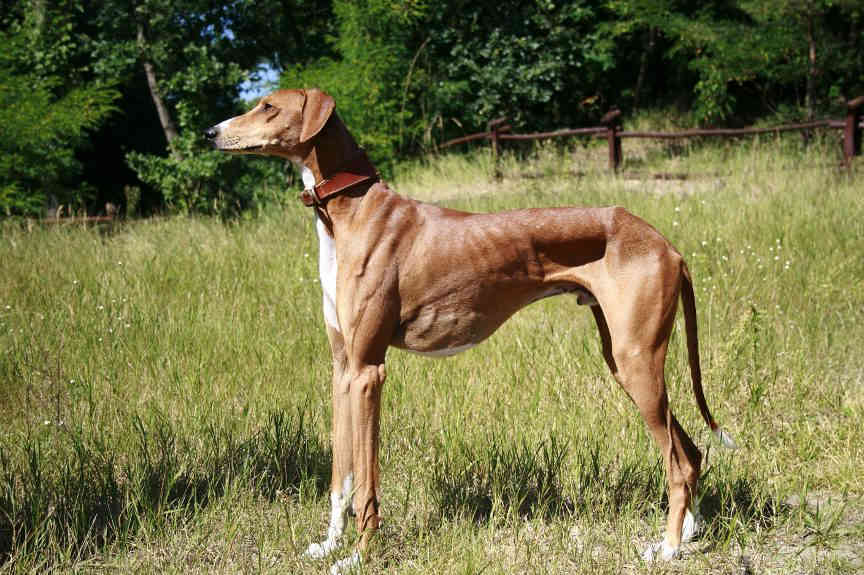 This Azawakh comes from the Arab part of Africa. It is an elegant, slender dog with short, delicate fawn hair with white markings. A lively and demanding move, it is not intrusive. Indifferent or distrustful towards strangers. He is extremely agile, he moves like a cat. A characteristic feature of this breed is movement. During the gallop, the dog seems to hover above the ground for a moment.

Azawakh is one of the desert greyhounds next to saluki and slough. At first glance, it resembles a short-haired slough, but it differs from him in a few important details. It is short, with a shape resembling an inverted rectangle (torso length less than the height at the withers), with hips placed higher than the withers. His body is covered with a very short, delicate coat, and bones and muscles are clearly visible under the skin.

Like other desert greyhounds, it has an extremely dry structure. He is extremely agile, he moves like a cat. A characteristic feature of this breed is movement. During the gallop, the dog seems to hover above the ground for a moment.

Genetic studies have established that azawakh is derived from African pariah dogs and is closely related to sloughs in northwestern Africa.

However, it connects it less with other greyhounds. It is a breed formed thousands of years ago largely in isolation from other dogs.

It retained many features of primitive dogs: in addition to the already mentioned ability to hunt in a group, great distrust of the unknown, strong guarding instinct, creating a complex hierarchy within the herd, issuing unique noises, the occurrence of additional premolars and a strong instinct to dig burrows. In addition, bitches often have heat only once a year.

They tolerate heat very well, but they freeze already at + 10 ° C. So without clothes you can’t do it, and they sleep preferably under the quilts or … cuddled one on top of the other, because they prefer the company of other greyhounds.

In the homeland of azawakh, breeding looks completely different than in Western countries or among Bedouins from the north, who use conscious breeding selection. Nomads from Sahel do not know what purity of the breed is, and their actions are only an addition to the natural selection that dogs are subject to in this extremely difficult environment. Immediately after birth, they decide which puppies to leave alive – usually, they are 2-3 male puppies. There is usually only one female per camp, and the father of the puppies is the dominant male in this area.

Currently, even in their homeland, these greyhounds are less and less likely to show hunting talents. The reason is the strong thinning of wildlife populations. However, they are still guardians of herds, camps and villages. Usually quiet, they raise the alarm when they see or sense something disturbing. They are quiet when the owner makes it clear that everything is OK.

Well socialized azawakh learns politely to welcome guests and even shows sympathy for those more friends. Excellent memory means that a person he meets can recognize much later, in a different situation. African greyhounds approach strangers from a distance – they are not particularly interested in making friends. This behavior is an expression of distrust typical of the breed.

In relation to their own family, azawakhi show a completely different face: they are tender and gentle, they like to cuddle. In general, they are very sensitive dogs, which do not tolerate harsh treatment badly, but some individuals have a strong character.

African greyhounds guard the camp, villages or herds of animals, hunt for hares and gazelles. Unlike most greyhounds, they often work in a herd – they chase away predators and hunt together. Their close cousin sloughi prefers self-hunting.

Like other greyhounds, they need a lot of movement; they should be able to run without a leash in a fenced area. They can take part in coursing and track races. Dogs of this breed are also characterized by extraordinary strength. They are suitable for jogging companions.

A strong bond with the guide does not bother this greyhound often act alone. In practice, there is a large variety of characters, from very mild to relatively sharp.

Continuous socialization and gentle but firm lead are extremely important. Then azawakh does not get in conflict with other dogs, and his contacts with strangers are also easy. On the other hand, he is kept wild in isolation and is difficult to raise.

For this reason, the opinion of dogs almost impossible to pose adhered to the breed. Working with them requires knowledge and delicacy, but when they gain trust, you can do anything with them.

The owner of azawakha should be an experienced and consistent person, but without requiring absolute obedience from this dog.

Natural selection has made this breed healthy and resistant. Dogs rarely get injured, and if they do, they recover quickly. Epilepsy and Wobbler syndrome (neurological disease) occur in some lines.

Dogs of this breed can under no circumstances be overfed or fed with low-quality food. A good idea for nutrition is a mixture of skimmed meat, rice and cooked vegetables, enriched with supplements.

This dog should not be fed dog food, slaughterhouse waste or human foods, especially those containing flour or other carbohydrates. It is best to give three small meals a day.

Azawakha care is uncomplicated. Just brush it from time to time, slightly more often during the molting period. In addition, you should check the condition of your ears, which, if dejected, may be susceptible to infection.

The breed occurs in Mali, in Burkina Faso, Nigeria and southern Algeria. It is bred to this day by nomads from Sahara and semi-arid areas adjacent to it from the south (the so-called Sahel).

The African Greyhound is often called the Tuareg dog. It is a traveling shepherd people of Berber origin, whose members have led caravans through the Sahara for over two millennia. In addition to the Tuareg, these dogs also breed other nomadic peoples, e.g. Fula, as well as the settled Hausa people.

In Africa, the breed occurs in various colors, not only those allowed by the FCI pattern. In addition to the popular red and brindle ointment, you can find many dogs with black or blue coating, as well as extensive white markings or even spotted ones. Occasionally black or blue greyhounds occur, with or without arson.

The European population was based on only 13 dogs imported in the 1970s and 1980s. Then there were further imports, but many of them were considered “unclean” because they differed from dogs bred in Europe. The American club of the breed, wanting to return to its original type, changed the pattern to better reflect the real picture of the African population of these dogs.

Azawakhs are still relatively rare in Europe and North America, but the number of their lovers is still growing. The breed is rare in Poland, but several farms are already operating.

The Azawakh pattern was established in 1982 thanks to information about this breed collected by Xavier Przeździecki. This French officer of Polish origin also contributed to the spread of this breed. 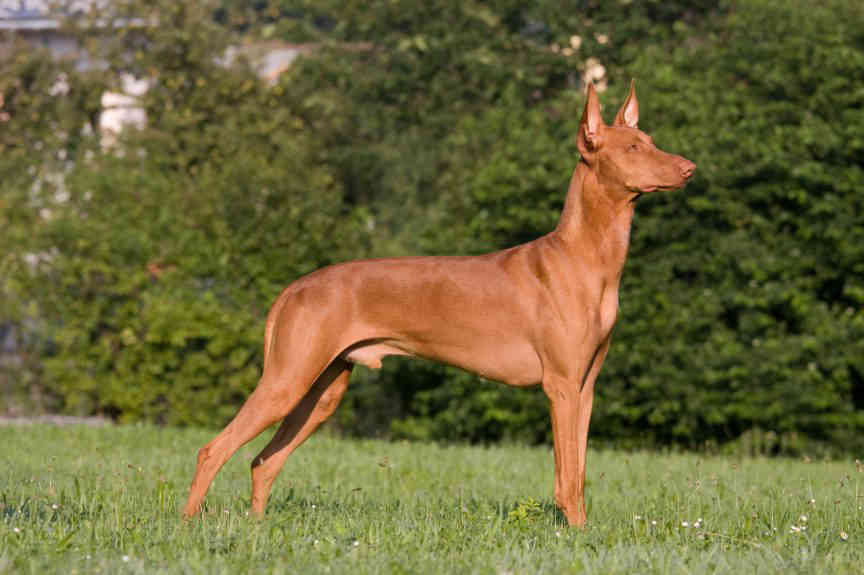 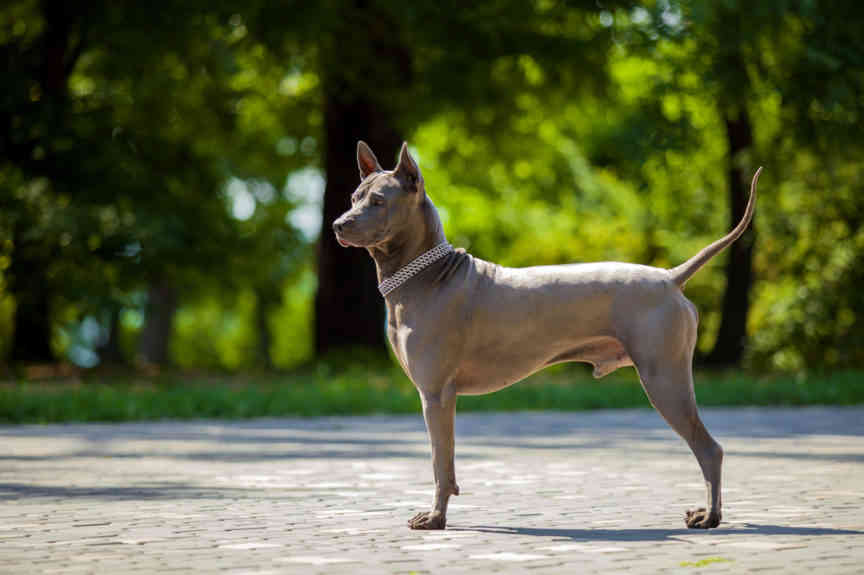